IMAGE is an Integrated Model to Assess the Global Environment.

The IMAGE modelling framework has been developed by the IMAGE team under the authority of PBL Netherlands Environmental Assessment Agency. IMAGE is documented on their website (including updates) and in the IMAGE 3.0 book. In 2014, IMAGE has been reviewed by an international advisory board (International review of IMAGE3.0). The development strategy for the period 2015-2020 is elaborated in the IMAGE strategy document.

What is IMAGE?
IMAGE is an ecological-environmental model framework that simulates the environmental consequences of human activities worldwide. It represents interactions between society, the biosphere and the climate system to assess sustainability issues such as climate change, biodiversity and human well-being. The objective of the IMAGE model is to explore the long-term dynamics and impacts of global changes that result from interacting socio-economic and environmental factors.

Integrated assessment models, such as the IMAGE framework, are established as powerful tools in assessing complex, large-scale environmental and sustainable development issues. As many of these issues are closely interlinked, integrated models are needed to analyse the consequences of these linkages, and the substantial inertia in the human-environment system can only be captured in long-term scenarios. Here, an overview of the IMAGE framework and its use in assessing long-term environmental and human future is presented. 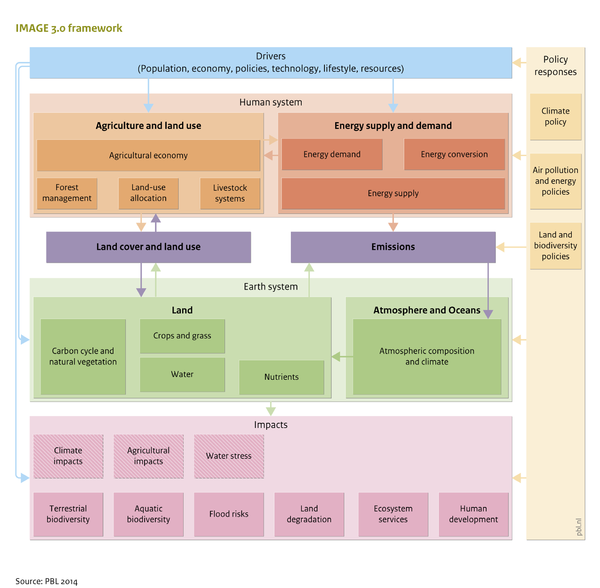 Key model inputs are descriptions of the future development of so-called direct and indirect drivers of global environmental change. These include population, economic development, lifestyle, policies and technology change (Drivers Component). Most drivers such as technology change are input in various IMAGE components (see Table of drivers). To ensure that exogenous assumptions made about these factors are consistent, brief scenario storylines are formulated on how the future may unfold and are used to derive internally consistent assumptions for main driving forces. For example, yield assumptions in the agricultural economy model and performance of solar power production in the energy model depend on a more generic description of the rate of technology change. Population and economic development can be provided as quantitative outputs from external sources or models, and dealt with quantitatively as exogenous model drivers. Other drivers mostly concern assumptions in other parts of IMAGE.
​
For population, IMAGE uses exogenous assumptions, such as total population per region, household size and urbanisation rate. However, GISMO population projections can also be used, which enable feedback on environmental factors, such as air pollution and undernourishment on population growth to be taken into account (Component Human development). Exogenous assumptions are used for economic variables, such as GDP. In most studies, economic projections are developed by macroeconomic models based on the scenario storylines. Sector-specific economic indicators and household consumption can be derived directly from such models, and complemented by income categories, reflecting the GINI coefficient, a measure of disparity in income distribution.